Infinite Careers is a collaboration between Career Services (Career Advising & Professional Development) and the MIT Alumni Association to explore career paths and the non-linearity of career decision making. Read profiles of alumni with unique career paths, hear their stories and network at a series of talks. 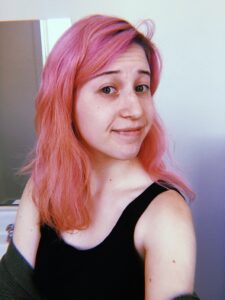 about storytelling and education, especially on the internet! Currently, she’s juggling a few small freelance projects, like cohosting the podcast SciShow Tangents and being the editorial assistant for the Eisner and Hugo award-winning comic Monstress. But for a little over 5 years, she worked full-time at the production company Complexly, where she was Content Manager of Crash Course, an educational YouTube channel that reaches over 12 million subscribers.

What influenced your choice of undergraduate major? How has it shaped your career choices and professional ability?

I actually bounced between a lot of different majors throughout my undergrad (Course 20 to 9 to 6-7 to 7 to 7 & CMS). My initial train of thought was that because I was going to MIT, I should pursue some kind of science or engineering, and the classes I happened to enjoy the most were biology-related. Then, my sophomore fall, I took CMS.100 (Intro to Media Studies) with Flourish Klink, and I knew that writing and media was truly where my heart wanted to be. So, mostly through sheer stubbornness, I ended up double-majoring. This kind of indecisiveness between sciences and humanities has actually helped me quite a bit in becoming a science communicator and working in new media, because I know how to interpret scientific papers and have practical lab experience, but also know how normal people talk to each other and how to de-jargon technical language. I also sincerely hope that I’ll continue being able to follow my heart, to some extent, in the kind of work I pursue, because media is ever-changing. So I’ve dabbled in a lot of different parts of the YouTube videomaking process, but maybe someday I’ll switch more to production or consulting or team management — who knows!

What has been the most rewarding aspect of your career?

Definitely hearing from people who have read the comic I work on or have watched Complexly’s educational videos and/or used them in classrooms. A huge value for me is helping people — whether it’s helping them think about themselves or the world more deeply, helping them understand a tricky concept, helping them become more civically engaged people, or something entirely different. So when I receive feedback that my work is helping people in these ways, it’s extremely rewarding and gets me through some of the more difficult times.

What is the biggest challenge you’ve encountered in your career? How have you managed or overcome it?

One of the biggest challenges has been finding self-confidence, because so much of creating media (even educational media, when you’re making things like online video) is subjective. In the very very beginning of my career, I overcompensated for this lack of confidence by working myself to the bone — putting in a lot of overtime to find the best stories or polish my scripts or make a lot of stuff — and that was NOT a good idea. It was a recipe for burnout.

Since learning that very real lesson, I’ve tried to embody a quieter self-confidence in the way I set boundaries, communicate clear expectations, and make time and space for myself and my direct reports or contractors to do our best work while also learning and growing. There are always more hurdles, like systemic inequalities within industries or people with power who abuse that power, but I try to fight against those things by talking with my peers (sharing salaries, sharing experiences with bad managers, being open to giving and receiving feedback) and vying for change through collective action (whether it’s formal unionizing or simply a group of people within an industry pushing for better standards).

To be honest, most of the time my strategy has been: 1) see a partially open door, 2) run through door. This is how I got into videomaking during my undergrad at MIT with the MITxBiology team and MIT+K12 videos, and kind of how I found my first and only full-time job at Complexly. It was one of 80+ media organizations I applied to in my Senior year out of sheer panic that I wouldn’t be employable with my weird 7 & CMS combo.

My most recent career decision, to leave that full-time job and seek something else, was a lot more thought-out and a lot more scary! I felt like I was no longer growing at Complexly and there were systemic issues with my position, the restructuring of the company in ways I didn’t agree with, and my ability to advocate for people with less power than me. This caused me to reach a point where I simply didn’t feel capital-g Good about working there full-time anymore, even if I generally agree with the kind of work they do, care about many coworkers, and think some projects are really special. So when my partner got into grad school and we relocated to Boston, I put in my notice!

Now, I’m kind of wandering aimlessly looking for the next partially open door… I’m doing various freelance projects because I need to make money, but I’m not sure what flavor of media creation I’ll get into next. Realistically, I may even pivot industries, because one downside of the media sphere is that it’s kind of unstable and doesn’t pay super well, but I’m a full-grown adult now who needs regular therapy, wants to cook more than boxed mac and cheese, and would like to live in a place with a yard and garden one day! So my current strategy is looking for a job with a little more stability, even if it means pursuing more of my passions in my free time. I don’t want to pivot in a way that feels antithetical to my values, but I’m casting a wider net than I did as an undergrad.

What professional development activities do you find really useful these days?

Maybe this is the MIT student in me, but every time I stumble upon something that feels broken in the “world of jobs” or specifically the media industry, I try to do a bunch of research on alternative systems. So, for example, when I experienced a horrible manager, I tried to write out for myself what felt so oppressive, dismissive, and hindering to my personal success and growth. Then, I focused my professional development energy in reading alternative management strategies until I stumbled upon something that I found matched up with my personality and values a lot better — combinations of servant leadership, and community building, and strategies that civic leaders have historically used in activism-type movements. While it didn’t necessarily land me a better manager right away, I think it made ME a much better manager even though I didn’t have an excellent role model to start.

Advocate for yourself, but also advocate for and uplift the great people around you. Inevitably, you won’t get along with everyone and some people will straight-up suck! But taking the time to appreciate people who deserve it will help you (and them) feel supported in times of adversity.

What career advice do you have for current MIT students, or those interested in entering your industry?

Broadly, I would say to look at what you value and see how you can make work match up with that — whether that’s an immediate value/need for financial stability, or making sure wherever you work has an environmentalist purpose, or just needing a straightforward 9-to-5 to survive while you mitigate personal burnout. I wish I had been a lot gentler with myself straight out of undergrad, instead of constantly pushing until I hit a sort of breaking point, but everyone’s path is different!

For those entering the media industry, I would say that there are so, so many different paths to work on things. The positions that are glamorized (at least in my perspective) are often full-time content creators with brand deals and teams to back them up, but that’s not a sustainable lifestyle for so many people. Based on your own strengths, you can find a way to create and support cool media, and input some creativity into your job while also saving some for your own life! So many people I’ve met have stumbled in at different points in their lives, and I — as someone who started making educational videos in college and then made educational videos professionally for 5 years — was definitely a minority among a bunch of colleagues who came from journalism, or film, or finance, or blogging, or computer programming, or other kinds of media production.

Do you have any tips for networking or job searching for current students and recent graduates?

It’s really tricky and I don’t think I’m very good at traditional networking, which is maybe why I’m not in media in New York or LA! My most successful networking has been when I’ve been genuinely curious about someone’s career path or had concrete questions about how they started doing the work they’re doing. So the first people I “networked” with were some CMS professors I had, where I showed up regularly to office hours or asked if I could interview them for the MIT Blogs (because I was too scared to just ask if I could talk to them about their careers). I ended up getting some UROPs and my current longest-running gig as the Monstress editorial assistant through these sorts of meetings! But I didn’t head into them trying to get work.

For networking in the media industry, I highly recommend finding people who do what you want to do and talking to them. This advice doesn’t really apply if you just follow a bunch of huge content creators, because you’re probably not going to get direct access to them except in a fan perspective. But if you want to stream, find some other small streamers who are doing what you’d want to do and show up — be friendly, maybe shoot them a message if you could ask them some concrete questions (and then actually follow through with concrete questions). I’ve made friends with a lot of folks who do behind-the-scenes support of content creators in various capacities just by interacting with them on Twitter or at conferences. I might be a little biased, but chances are, the office assistants or social media managers or script editors of cool people are often even COOLER people that know more of the ins-and-outs of working in the media industry, rather than just being the creative force of a company. A lot of my work-related friends are in these behinds-the-scenes roles, as a disclaimer, and I’ve had both really productive career conversations and goofy chats with them.

What do you like to do outside of work for fun/relaxation/inspiration?

Since so much of my work is on a screen, I try to balance that out, although my default relaxation is consuming media that I *don’t* work on, so like TV shows or cartoons or non-sciencey podcasts. Recently, I’ve been getting more boring and domestic, which has been great for relaxation — things like cooking different crockpot recipes, or tending to houseplants and hopefully a community garden, or restoring an old sewing machine. I really like the tactile nature of working with my hands, but am quite far away from doing that as a career, so it’s fun to pursue those kinds of things as a hobby.